Bhatia, Mahajan, Asi, and Ashadeep: Evolving paradigms in the field of periodontal medicine: A review

Evolving paradigms in the field of periodontal medicine: A review

The association between the oral and systemic health has been a matter of discussion since the focal infection theory of the early 20th century. This field has evolved with supportable evidence linking poor periodontal status with systemic diseases and extensive research on this complex relationship has given rise to new field of “Periodontal Medicine.” Although the evidence base is quite large on the impact of systemic disorders on periodontium but a smaller but growing evidence base supports an association between poor periodontal health and systemic diseases. Moreover, today’s era of evidence-based medicine and dentistry provides an excellent environment to examine the possible relationships between oral infection and systemic disorders. Therefore, the purpose of writing this review article is to understand the underlying pathophysiology between periodontal health and systemic health with particular focus on the effects of periodontal disease on systemic outcomes.

Depicting the selection criteria and studies 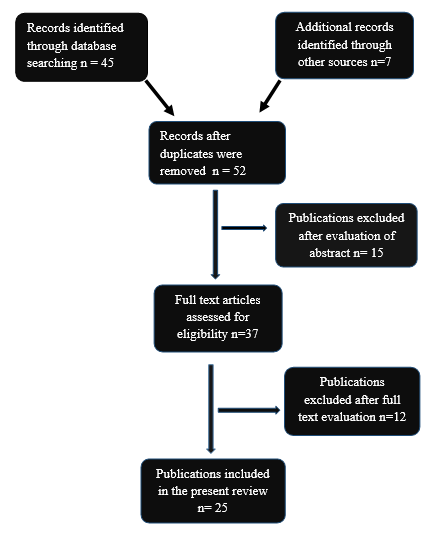 Periodontal disease is an inflammatory disease in which microbial etiologic factors induce a series of host responses that mediate inflammatory events, leading to tissue destruction in susceptible individuals.12 The recent Global Burden of Disease Study (GBD,1990–2010) indicates that, periodontitis is the 6th most prevalent disease worldwide, with an overall prevalence of 11.2%.13 Periodontal lesions are recognised as a reservoir of gram negative bacteria, inflammatory mediators such as pro-inflammatory cytokines and microbial toxins which could enter the bloodstream and leads to bacteremia which have been found to be a risk factor for diabetes mellitus, cardiovascular disease, respiratory disease, rheumatoid arthritis and other systemic conditions.12 Once the bacteremia takes place, focal infection conditions can occur in the blood stream and organs through three pathways, which include metastatic infection from oral cavity due to bacteremia, metastatic injury due to oral microbial toxins and metastatic inflammation due to immunologic injury caused by oral microorganisms.7, 12, 14

Moreover, periodontal disease can also affect the host’s susceptibility to systemic diseases by three different ways as suggested by Page in 1998. These pathways include shared risk factors for periodontal disease as well as for systemic diseases (smoking, stress, aging, race or ethnicity, and gender), subgingival biofilms acting as reservoirs of gram-negative bacteria and periodontium acting as a reservoir of inflammatory mediators (tumor necrosis factor-a, interleukin-1b, and gamma interferon as well as prostaglandin E2), which can enter the blood stream and induce adverse systemic effects.4, 14

There is progressive evidence that a number of systemic diseases are associated with opportunistic infections in periodontal medicine.15 As a result, there has been a resurgence of interest in oral microbial ecology, mucosal immunity and associations with systemic conditions, such as Cardiovascular disease, stroke, diabetes, pre-term low birth weight babies, respiratory infections, osteoporosis, cancer, rheumatoid arthritis (RA), Alzheimer's disease (AD), gastrointestinal disease and chronic renal diseases.3, 6, 10, 14, 16

Various possible risk factors associated with cardiovascular diseases among which evidence linking chronic infection and inflammation to cardiovascular disease has been accumulating and suggesting that periodontal disease is capable of predisposing individuals to cardiovascular disease. 17 Accumulating evidence suggests that inflammation plays a central role in the pathogenesis of CVD. 18 Periodontitis is an inflammatory disease caused by gram-negative bacteria, which can induce the production of host inflammatory mediators, eventually leading to the breakdown of tooth-supporting tissues. Presence of periodontal pathogens in atheromatous plaque and their association with atherogenesis have been described in literature. These microbes lead to atherogenesis either by direct invasion of the arterial wall or by release of inflammatory mediators with atherogenic effects. Moreover, increased levels of CRP, TNF-α also provide insight into the association of PD with hypertension. and CVD. 19 This suggests that periodontal disease and CVD may share common etiological pathways and that the association between these two diseases is plausible. Even though a number of meta-analyses indicated the association between PD and CVD, the cause-and-effect relationship between them still not with current available evidence.

Pathways to explain link between CVD and periodontal diseases

Specific pathways acting independently or collectively have been proposed to explain the plausibility of a link between CVD and periodontal infection described in Figure 2.4 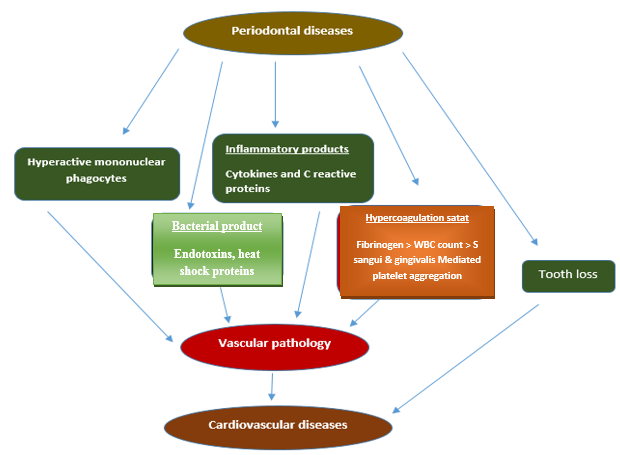 DM is metabolic disorder characterized by hyperglycemia due to defective secretion or activity of insulin. The relationship between diabetes and periodontal diseases is not only bidirectional but cyclical also which means that not only diabetes predisposes the individuals to oral disease but also periodontitis once established exacerbates diabetes and worsen the metabolic control. Periodontal pathogens have the ability to invade deep vascular endothelium in relation to the periodontium and further aggravate the microvascular complications associated with the DM by releasing their toxins and metabolic products.20 Various biologically plausible mechanism that explain pathobiology of the interactions to validate a relationship between diabetes mellitus and periodontal disease described in Figure 3.

Increased cytokine production in periodontal diseases contributes to insulin resistance by modifying the insulin receptor substrate-1 via serine phosphorylation, increasing free fatty acids production by altering adipocyte functions, which further alters the pancreatic B-cell function and decreasing endothelial nitric oxide production.14 A study done by Grossi et al. 1998 suggested that periodontal pathogens by releasing their metabolic products and toxins have the ability to increase the insulin resistance and may complicate the severity of diabetes and the degree of metabolic control.21 Moreover, it has also been confirmed that periodontal therapy in patients with diabetes can improve glycemic control (HbA1C reductions of approximately 0.4%).22 Therefore, people with poorly controlled diabetes must be considered at the risk for periodontitis. Early diagnosis and prevention are of fundamental importance to avoid the large scale irreversible damage to periodontal supporting tissues. Furthermore, closer collaboration between medical and dental clinical teams is necessary for joint management of patients with diabetes and periodontal diseases. Although the mechanisms describing the increase risk of periodontal diseases by diabetes have been demonstrated in abundance in various studies but the impact of periodontal disease on glycemic control of the diabetes is still not clear and it needs further studies. 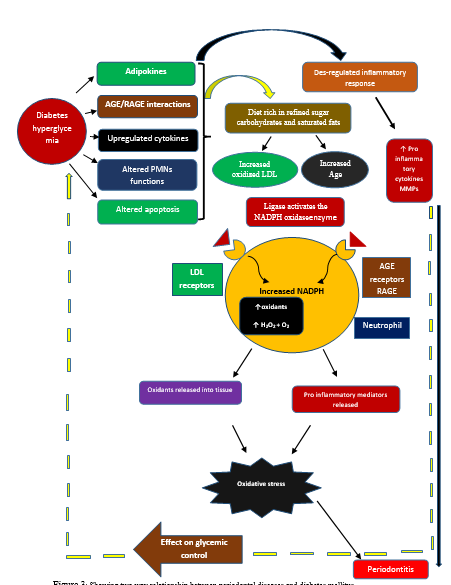 Although adverse pregnancy outcomes are multifactorial in nature in which a complex molecular and biologic interplay between mother and fetus occur but many studies suggest that periodontal infections may be potentially one of the causes of pregnancy complications.9 Studies have shown that periodontal diseases, including gingivitis and periodontitis, affect approximately three out of four pregnant women resulting in preeclampsia, preterm birth ( (PTB, < 37 weeks’ gestation) and low birth weight ( LBW, 2,500 g,).4 Evidence of increased rates of amniotic fluid infection, chorioamnion infection, and chorioamnionitis supports an association between preterm birth or low birth weight and infection during pregnancy.3 Increased levels of gram-negative bacteria associated with progressive periodontal diseases increases in the dental plaque during second trimester of pregnancy and result in production of a variety of bioactive molecules that can directly affect the host. Microbial components such as LPS activate the cells to synthesize and secrete a wide array of molecules, which include IL-1b, TNF-a, IL-6, and PGE2 and matrix metalloproteinases. These molecules may escape into the general circulation and cross the placental barrier, they could augment the physiologic levels of PGE2 and TNF-a in the amniotic fluid and induce premature Labour.16

Biochemical measures of maternal periodontal status and oral microbial burden are associated with preterm birth and low birth weight as important micorganisms associated with mature plaque and progressing periodontitis, Bacteroides forsythus, P. gingivalis, A. actinomycetemcomitans, and Treponema denticola, are detected at higher levels in mothers of preterm low-birth-weight infants.4 Human case-control studies have shown that women who have low-birth-weight infants as consequence of either preterm labor or premature rupture of membranes tend to have more severe periodontal disease than mothers with normal-birth-weight infants. Moreover, a study by jeffcoat et al. 2001 demonstrated that subjects with generalized periodontitis have 5 fold increased risk of preterm birth before 35 weeks of gestation and 7 fold increased risk of delivery before 32 weeks of gestation and also proposed that bacterial infection can lead to increased amniotic prostaglandin production, which in turn results in pre-term labor.23 Furthermore, among the mothers of preterm low-birth weight a significant inverse association between birth weight and GCF PGE2 levels have been suggested in a case control study.4 However, the role of the host’s inflammatory response appears to be the critical determinant of susceptibility and severity. From these studies, it can be inferred that, periodontitis may be a marker for preterm delivery susceptibility as well as a potential risk factor and may serve as a contributor to the morbidity of the condition.

COPD is a combination of chronic bronchitis and emphysema and literature has shown that periodontitis increases the risk of developing COPD. Scannapieco et al in 2003 presented a systematic review and concluded that poor oral hygiene and periodontal diseases appears to be associated with nosocomial pneumonia and improved oral hygiene even in high risk patients have the potential to decrease nosocomial pneumonia.24 In addition to this dental plaque in periodontitis patients may provide a surface over which the potential respiratory pathogens (PRPs) might adhere and provide a reservoir of infection. Furthermore, the oral surfaces of subjects at high-risk for pneumonia, may to provide receptors for the adhesion of PRPs and increase the risk of nosocomial pneumonia in such patients.24

Accumulation and activation of neutrophils is the common pathophysiological mechanism in both the diseases. Since COPD shares similar pathogenic mechanisms with periodontal disease therefore, the resulting neutrophil influx leads to the release of oxidative and hydrolytic enzymes that case tissue destruction directly. Moreover, elevated levels of C reactive proteins (CRP), interlukin-8 (IL-8), tumor necrosis factor- (TNF- α), are also confirmed in both the diseases.25

The influence of systemic conditions on the oral health especially on the periodontium has long been recognized and well supported by scientific evidence. However, an evidence base for the impact of periodontal health on overall systemic health has recently begun to be established. This emerging field of periodontal medicine offers new insights into the concept of the oral cavity as one system that is interconnected to whole human body. Although a number of cross- sectional, case-control and longitudinal studies and systematic review of these studies have explained the positive association between poor periodontal health and systemic diseases but further longitudinal studies and intervention trials are needed to further substantiate these findings. Moreover, readdressing the periodontal-systemic association is potentially of great public health significance as periodontal diseases is largely preventable an readily treatable in most of the instances and further provides new opportunities for prevention and improvement in the prognosis of various systemic diseases and conditions.

Inflammatory and immune pathways in the pathogenesis of periodontal diseasePeriodontol2014641578010.1111/prd.12002