Background: Bleeding on probing (BOP) is the best documented parameter in the monitoring of periodontal health and inﬂammation of the gingival tissues. It is measured as bleeding provoked by applying a probe to the bottom of a sulcus/pocket. Since BoP may be provoked by trauma to the tissues using a periodontal probe hence, probing pressure can be considered as an important factor in the assessment of bleeding on probing.

Aim: The purpose of the study was to evaluate bleeding on probing by conventional probe and pressure sensitive probe.

Materials and Methods: 50 subjects (1400 sites) in this split mouth study were evaluated for bleeding on probing by using a conventional periodontal probe and a manual pressure sensitive probe. Gingival Bleeding Index (Ainamo and Bay 1975) was used in the study for assessment of BOP.

Conclusion: Amount of pressure applied during probing can be a significant factor in assessment the periodontal disease activity.

Diagnosis is a significant marker to assess the periodontal health of the patient. Periodontal probe have always been the best clinical diagnostic tool in the evaluating the health status of periodontal tissues. They are designed to facilitate pocket or attachment level measurements at any tooth site. A probe consists of three parts, including handle, shank, and tip. The tip is the working end calibrated with millimeter markings.1 There are different types of probing system present including generation of probes. The University of North Carolina probe (PCP UNC 15, Hu Friedy Manufacturing Co., Chicago, IL, USA) is the choice of instrument in clinical research when conventional probes are required.2 Second generation includes Pressure sensitive probe (TPS) that maintains consistency of probing force for periodontal examination. Pressure-indicating marks are present on the pressure sensitive probe. When the operator force reached 15 grams, the shank moved up to match the mark.3

According to Classification of Periodontal and Peri-implant Diseases and Conditions 2017, probing force of 0.25N has a direct and linear effect on bleeding on probing (BOP). Clinical gingival inflammation is a well-defined specific condition characterized by BOP. It is found to be an accurate and objective tool for assessing gingival and periodontal health.4

The present study was conducted to evaluate bleeding on probing by two different probing systems including conventional UNC-15 probe and pressure sensitive probe.

This was a randomized split mouth study conducted in the Department of Periodontology. Ethical clearance for the study was obtained from the ethical committee of institute.

Systemically healthy patients with age group of 18 -55 years were included in the study. Screening of fifty seven patients was done from the Out Patient Department, out which seven patients were excluded as they were found to be on anticoagulant therapy. Pregnant/lactating mothers and patients having bleeding disorders were also excluded from the study.

Demographic details like name, age, gender etc were recorded and informed consent was taken from all the fifty patients who had agreed to participate in the study.

Total 1400 sites were evaluated for bleeding on probing. Randomization was done by flip of the coin for first/ fourth and second / third quadrants which were evaluated either by UNC-15 probe (conventional system) or TPS probe (pressure sensitive system) Figure 1. About 700 gingival sites were examined by each of the probing system and bleeding scores were recorded according to Gingival Bleeding Index (Ainamo and Bay 1975).5 Figure 2 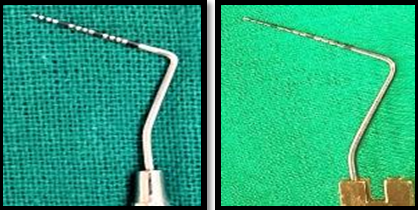 Evaluation of all the examined bleeding sites (1400 sites) was done. The comparison of presence or absence of sites with BOP was done between UNC-15 and TPS (700 sites by each probe) using the Chi-square test. The number of sites with BOP was found to be significantly more among UNC-15 probe compared to TPS probe. 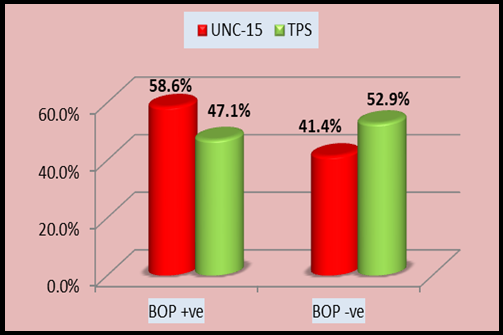 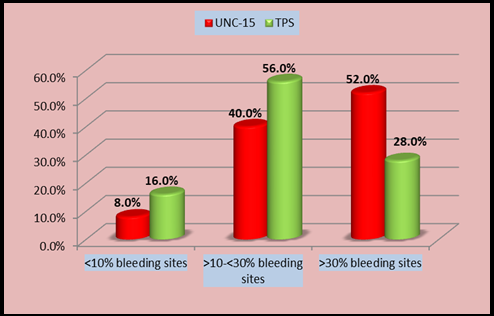 Gingival inflammation is a site-specific and well defined condition for which numerous measurement systems have been proposed and validated indicating its high prevalence globally.6 The World Work shop 2017 introduced the term “pristine periodontal health” meaning absence of clinical inflammation. However, “Clinical periodontal health” is characterized by an absence or minimal levels of inflammation. Out of clinically detectable signs, such as color (redness) or volume changes (edema), bleeding on probing is considered as an accurate and objective measure for assessing periodontal health.7, 8 Gingival bleeding is found to be an early sign of inflammation and was first incorporated in a clinical periodontal index in 1958. Histopathologically, gingival bleeding is characterized by larger and denser inflammatory infiltrates.9

Periodontal probe is the diagnostic key instrument and its precision is affected by factors like the design of the probe, probing force, probe position etc. The periodontal clinical signs detected through probing include bleeding tendency, probing depth, and clinical attachment level. According to world work shop 2017, probing force has a direct and linear effect on the prevalence of BOP.4

The present split mouth study is unique of its own as it has compared two different probing systems for evaluation of bleeding on probing. Randomization prevents biasing of the study which was done by flipping a coin. The gingival sites were examined either by conventional UNC-15 probe or by manual tactile pressure sensitive (TPS) probe.

The authors used the Gingival Bleeding Index (Ainamo and Bay 1975)5 for evaluating BOP. The world workshop 2017 accurately defined and graded a BOP score (BOP %) as the proportion of bleeding sites stimulated by a standardized (dimensions and shape) manual probe with a controlled (∼25 g) force to the bottom of the sulcus/pocket.5

American Academy of Periodontology (AAP) updated the 1999 Classification of Periodontal Diseases and Conditions and stated that lower the proportion of BOP positive sites, higher the gingival health. They concluded that gingival sites with the presence of BOP < 10% perceived as a clinically healthy gingiva while (BOP ≥10% and ≤30%) is considered as a localized gingivitis case. Patients having BOP > 30% was graded as generalized gingivitis case and was more prone to periodontal disease. However, case definition of periodontal disease involves the criteria of clinical attachment loss but involves BOP too.

The World Work shop 2017 defines a periodontally-healthy patient with a BOP score < 10% without attachment loss and radiographic bone loss (intact periodontium). Moreover, the concept of minimal level of gingival inflammation throughout the dentition can be considered as compatible with “clinical periodontal health”.4

The present study found that BOP may be used for (i) distinguishing between a healthy and gingivitis patient (ii) classifying a gingivitis case (localized, generalized). Using BOP as a criteria for assessing disease activity would have the following advantages: 1) It is an objective, universally accepted, reliable and accurate clinical sign 2) Gingival bleeding represents a clinical sign often perceived by the patient, whereas low level of BOP% are consistent with self-reported perception of healthy gingival conditions; 3) BOP recording is user-friendly, economic, and requires minimal/no technology.

Pressure sensitive probes proved to better compared to conventional probes like UNC-15. Controlled probing force maintains the integrity of connective tissue attachment leading to precise periodontal diagnosis. Bleeding on probing can be used as reliable criteria for evaluating the “minimal” amount of gingival inflammation distinguishing from a periodontally-healthy patient.