Bharadwaj and Siddiqui: A case report on gingival depigmentation by scraping method by scalpel

A case report on gingival depigmentation by scraping method by scalpel

Smile is the most wonderful gesture of the human being. A Person who is genuinally happy shows his or her pleasure in the form of smile. A beautiful smile for sure enhances individual self confidence. A beautiful smile lies in a harmonial balance between competent lips, size, color, and proper alighnment of teeth and the color of gingival tissues. The normal color of gingival is coral pink as in accordance to British population, and pale pink as in accordance to Indian population. However this gingival pigmentation varies among each and every individual in accordance with the color of the skin, various pigments present in human body like melanin, haemoglobin, carotene. However this melanin when secreted in excess, can lead to brownish, blackish, or bluish discoloration of gingiva, and this discoloration is denoted by the term hyperpigmentation, and the procedure to overcome this hyperpigmentation is called as depigmentation. Present case report is on a 21 years old female whose chief complaint was visual blackish display of gums while smiling. So the procedure depigmentation was done by surgical scalpel by scraping method, and the patient showed better results following two weeks after procedure.

Key Messages: Esthetic dentistry is a recently emerging branch. People now a days are much more concern about the gingival esthetics and smile design, as they want their smile to be beautiful in order to boost up their confidence. . One of the gingival esthetic for which the people are concerned are the hyperpigmented gingiva. Gingival depigmentation is the process to remove this abnormal pigmented gingiva. The clinician must have a knowledge as for which condition, which type of gingival depigmentation technique can be applie so as in order to make the treatment successful.

The most amazing gesture that can be shown by one person to another is the smile. Smile is the feeling of joy that is reflected on a person face, if the person is genuinally happy. A beautiful smile is the combination of three major factors i.e. the competent lips, the shape, size, and alignment of teeth in the arch, and the color of gingiva.1 The normal color of gingiva is coral pink in the British population and pale pink in the Indian population. This color of gingiva relies to a much extent upon the color of the skin, which further relies upon various pigments like melanin, haemoglobin, and keratin.2 Among them melanin has the highest influence on the color of the gingiva. Melanocytes are dendritic cells located in basal and spinous layres of gingival epithelium. They synthesize melanin in organelles called premelanosomes or melanosomes. These contain tyrosinase, which hydroxylates tyrosine to dihydrophenylalanine (DOPA), which in turn progressively converted to melanin. This melanin when secreted in excess, can lead to pigmented gingiva which varies in color from blackish, bluish, to brownish which may have an esthetic concern while smiling. According to Dummett Oral pigmentation index, the incidence of oral pigmentation was gingiva (60%), hard palate (61%), mucous membrane(22%), tongue(15%).3 Hence a procedure called as depigmentation is used to treat this pigmented gingiva. This depigmentation procedure is carried out by various methods such as by scalpel, electrosurgery, cryosurgery, lasersand radiosurgery., by rotary bur as each technique having its own significance, advantages, and disadvantages.4

Present case report is on a 21 years old female patient who came to Peoples College of Dental Science and research centre in the department of Periodontology, with the chief complaint of display of blackish gums while smiling. Upon examination, the patient did not have any contributing medical history. There was pigmented gingiva in maxillary tooth region beginning from incisors to Premolars. So after giving local infiltration from maxillary incisors to maxillary premolars, depigmentation by scraping method by scalpel was performed by keeping the surgical scalpel parallel to the long axis of the teeth, and scraping the pigmented gingiva in layers. After two weeks of the surgery, there was restoration of the normal pale pink color of gingiva and the healing was uneventful.

The patient was prescribed ibuprofen for three days, in order to reduce the chances of occurrence of pain and was instructed to resume the oral hygiene measures after one week. 0.2% Chlorhexidine mouth rinses was prescribed in order to keep the operated area clean. 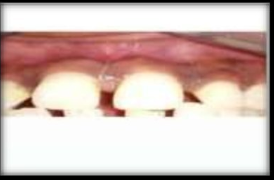 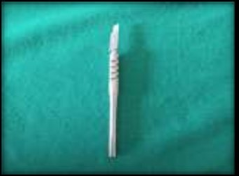 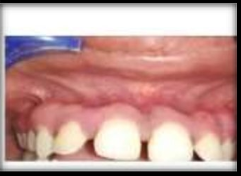 Melanin is the pigment that is secreted by the melanocytes, and is responsible for color of the skin, including the soft tissues of the oral cavity, i.e. gingiva. Amount of pigmentation is identified according to Dummett, oral pigmentation index, which shows highest pigmentation in palate, followed by gingiva.3 This pigmentation can vary depending upon individual skin color. The color of this gingival pigmentation can vary from blue, brown, black. Depigmentation is the procedure used to treat the gingival pigmentation. Various techniques are there for gingival depigmentation, each having its own advantages, limitations, and significance. 4 In our case report, gingival depigmentation was carried out by surgical scalpel by scraping method. Tipton et al found that the surgical wound by scalpel heals much faster as compared to the electrocautery induced wound.5 Scalpel surgical technique was first demonstrated by Dummet and Bolden in which they found that scalpel surgical technique is simple, easy to perform, non-invasive, cost effective, doesnot require any special armanterium, and faster healing.6