Localized inflammatory or reactive overgrowths are quite more common clinical findings on human gingiva. Most of the lesions are benign and innocuous though some have potency to transfer in to a malignant lesion. These types of lesions are difficult to identify clinically as their appearance are quite similar so only Histopathological evaluation can detect their identity. In this case report we displayed a case of Peripheral Ossifying Fibroma in maxillary anterior tooth region in 32 year old female patient along with clinical, Histopathological evaluation along with present and future treatment details. Peripheral ossifying fibroma (POF) is usually a fibromatic, non neoplastic enlargement of the gingiva which shows areas of calcification or ossification. Synonyms for POF include Peripheral cementifying fibroma, Peripheral fibroma with calcification, Calcifying or ossifying fibrous epulis and Calcifying fibroblastic granuloma.

Various localized reactive lesions are seen on the gingiva which include Pyogenic granuloma, Peripheral giant cell granuloma, Focal fibrous hyperplasia and Peripheral Ossifying Fibroma (POF).1 Though pyogenic granuloma is one of the most commonly occurring gingival overgrowth in gingiva but peripheral ossifying fibroma also found in anterior tooth region. POF, also known as peripheral cementifying fibroma, peripheral fibroma with cementogenesis, peripheral fibroma with osteogenesis, peripheral fibroma with calcification, calcified or ossified fibrous epulis, and calcified fibroblastic granuloma infrequently occurring focal, reactive, non-neoplastic tumor-like growth of the soft tissue that primarily arises from the interdental papilla may arise as a result of such irritants as trauma, microorganisms, plaque, calculus, restorations, and dental appliances.2, 3, 4 Craniofacial bones are primarily the site for occurring Ossifying fibroma which is generally two types: Central and peripheral. Ossifying fibroma arises from the endosteum or the PDL adjacent to the root apex and expands from the medullary cavity of the bone are categorized as central type and those shows a contiguous relationship with the PDL, occurring solely on the soft tissues overlying the alveolar process are categorized as peripheral type.5, 6 The present article highlights a case report related to peripheral ossifying fibroma in a 32-year male patient, its diagnosis, satisfactory clinical management along with future treatment planning.

A 32-year-old female patient was reported to the department of Periodontology with the complaint of swelling & discomfort while eating and speaking due to a growth in the upper front teeth region. History dates back to 8 months when patient first noticed a single nontender small nodule which was increases in size after that till date of presentation. No relevant history of bleeding or pain, no significant medical history and no history of any medication was recorded at that time. Intraoral examination revealed firm, erythematous, non-hemorrhagic, non-tender, blanched on pressure and pedunculated solitary oval growth present on the interdental and marginal gingiva of the upper right central & lateral incisor i.e. 11 & 12 measuring about 15mm x 15mm. [Figure 1] POF, peripheral giant cell granuloma, gingival fibroma, pyogenic granuloma, peripheral odontogenic fibroma were noted as differential diagnosis. Hematological investigation was done including complete blood picture and blood glucose and all the reports was normal. radiological investigation through IOPA radiograph was done and it revealed that there was interdental bone loss around the RCT treated 11[Figure 4]. Patient education and motivation, Oral hygiene instructions, thorough scaling and root planing, reevaluation and surgical excision of the lesion under local anesthesia are planned after clinical, hematological and radiological examination. On the appointment day of supragingival ultrasonic scaling careful selective grinding was done to make that tooth trauma free and to eliminate the local irritants. After 15 days of SRP reevaluation done and planned for surgical excision. Complete surgical removal of the growth along with deep curettage was done under local anesthesia [Figure 2] and non eoginol base COE –PAK periodontal dressing was placed. Patient was given post-operative instructions and was prescribed with analgesic (Tablet Ibuprofen400mg tid) and mouth rinse (0.2% chlorhexidine gluconate twice-a-day for 1 week). She was recalled, after 1 week for follow-up. The excised tissue [Figure 3] was placed in 10% neutral buffered formalin and sent for the histopathological examination. On histopathological examination, low power magnification (4x) showed a keratinized stratified squamous epithelium (gingiva), overlying a fibrous interlacing collagen bundles and numerous ossifications. This picture is consistent with the clinical diagnosis of POF. [Figure 5] At 1 week post-operative visit, patient presented for periodontal dressing removal and follow-up examination. There was a satisfactory healing [Figure 6]. Patient is on regular follow-up. There was no recurrence at 3 months follow up. [Figure 7] 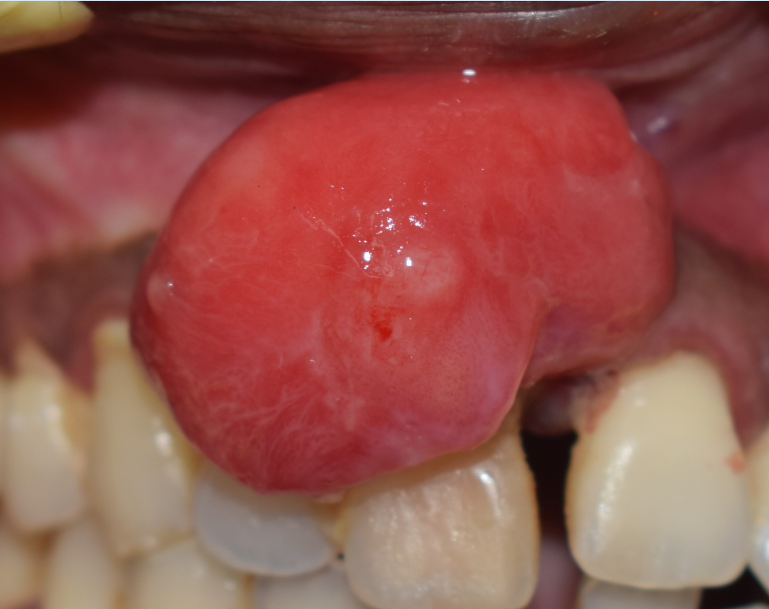 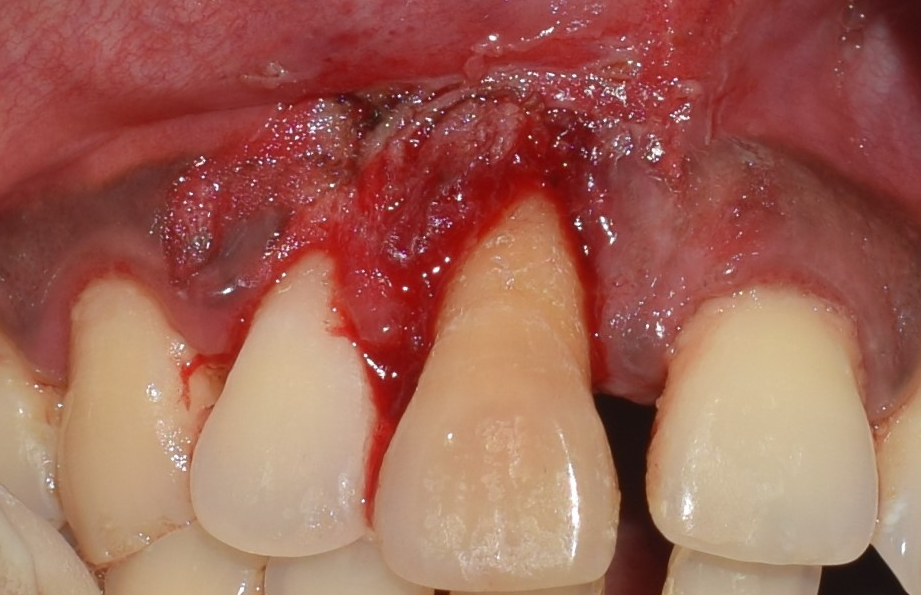 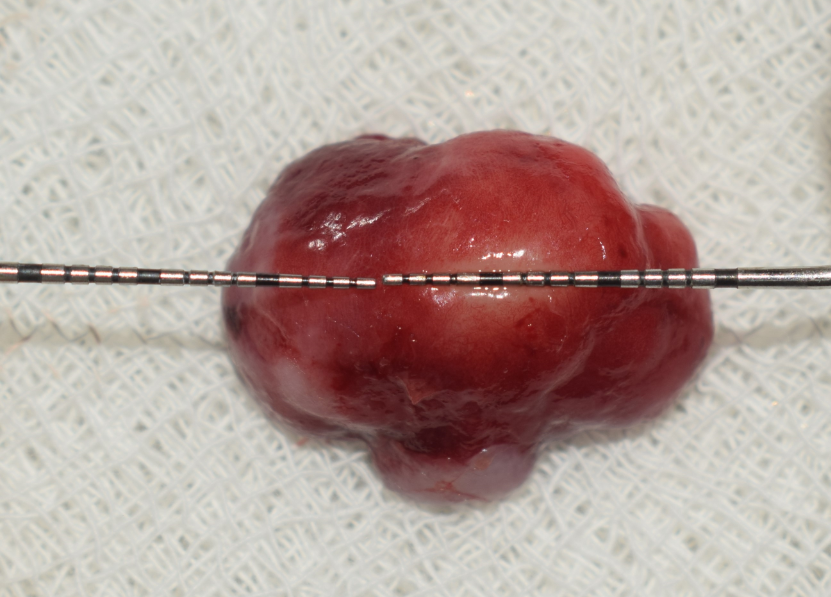 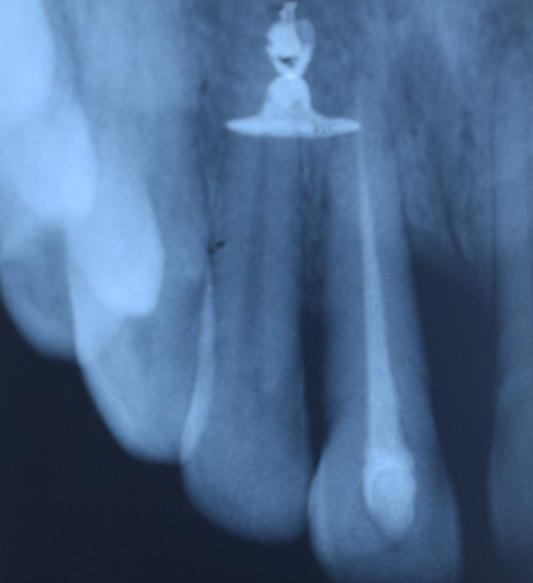 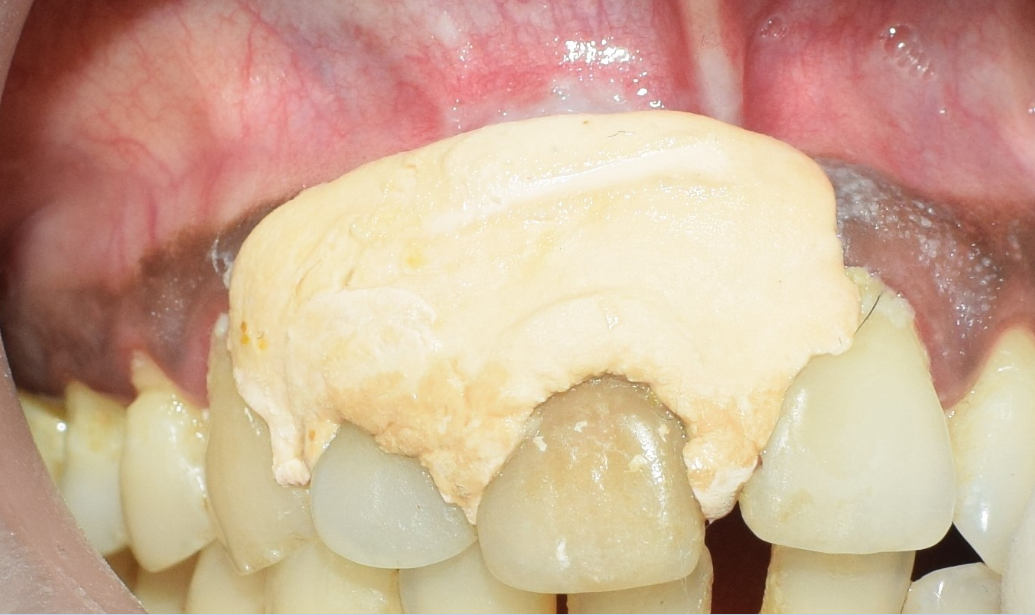 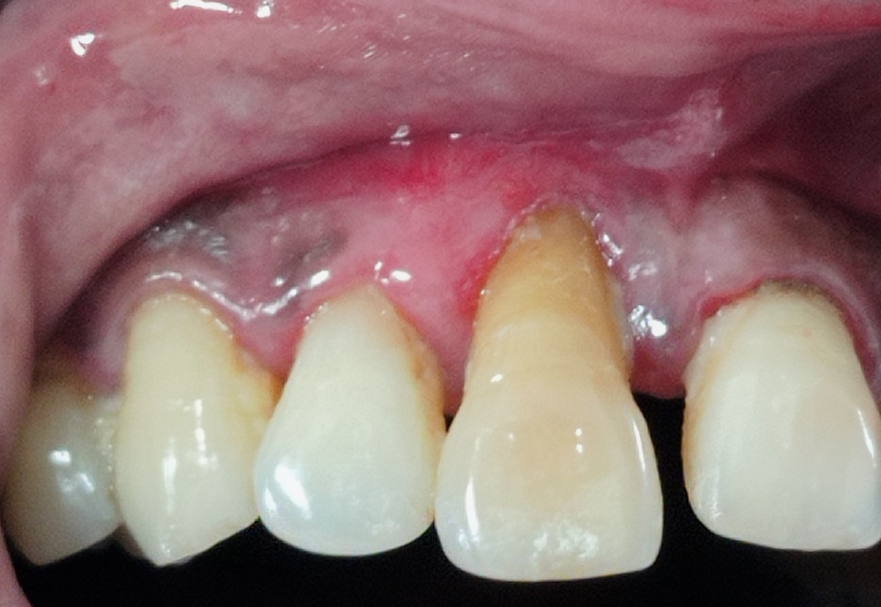 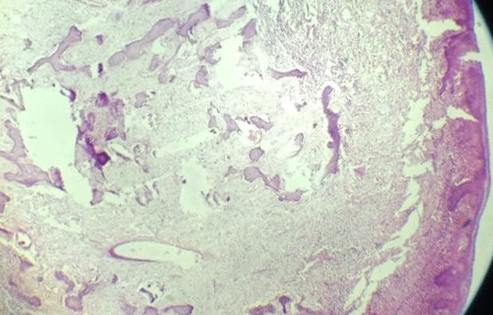 The term peripheral ossifying fibroma was originally coined by Gardner in 1982 and described POF as a lesion that is reactive in nature and is not the extra osseous counterpart of a COF of the maxilla and mandible.3 Since the late 1940s Intraoral ossifying fibromas have been described in the literature and several terms are used like - epulis, peripheral fibroma with calcification, POF, calcifying fibroblastic granuloma, peripheral cementifying fibroma, peripheral fibroma with cementogenesis and peripheral cemento-ossifying fibroma to describe similar type of lesions. The mere number of names used for fibroblastic gingival lesions in literature indicates there was much controversy regarding the classification of these types of lesions.6, 7 Jacoway JR in 1966 in his report of 376 cases suggested POF represents a separate clinical entity rather than a transitional form of pyogenic granuloma, PGCG, or irritation fibroma.8 According to Eversole and Rovin the similar sex and site predilection of pyogenic granuloma, PGCG and POF, as well as similar clinical and histological features, these lesions may simply be varied histological responses to irritation.9 Regardless of the presence or absence of calcification cellular connective tissue is so characteristic in POF that a histological diagnosis can be made with confidence with that as stated by Gardner in 1982.3

According to Buchner and Hansen’s hypothesis POF may be misdiagnosis as a pyogenic granuloma as it in its early situation presents as ulcerated nodules with mild calcification.10

Due to presence of oxytalin fibers within the mineralized matrix of most of the lesions, proximity of gingiva to the PDL and exclusive occurrence in gingiva, it is suggested that POF arises from PDL cells but the actual etiopathogenesis of POF is not well discussed. Chronic gingival injury, gingival irritation, sub gingival calculus, or a foreign body in the gingival sulcus may responsible for excessive proliferation of mature fibrous connective tissue in POF. Metaplastic features can also be seen due to presence of chronic irritation to the periosteum and periodontal membrane.

Young females (first and second decades of life, increasing occurrence in the second decade, and declining incidence after the third decade) are suffered more than male from POF as hormonal influence may be an important factor for that occurrence along with other factors. The female and male ratio varies from 1.22:1 and 1.7:1 to 4.3:1.13, 14

There may be no significant changes on radiograph in most of the cases but according to degree of mineralization there may be some radiodensity in some cases. CBCT and MRI can be done as an additional investigation for larger lesions.15, 16

In this case there is some amount of bone loss in between 11 and 21 which is rare in that type of lesion and may be due to trauma on that tooth 10 years ago when patient got RCT treatment due to Ellis class III fracture .

POF, peripheral giant cell granuloma, gingival fibroma, pyogenic granuloma, peripheral odontogenic fibroma are noted as differential diagnosis. Surgical excision of growth was done under local anesthesia after all clinical hematological and radiological investigation. Deep subgingival curettage is done also along with excision to assure complete removal of the growth. POF was confirmed as a definitive diagnosis through histopathological evaluation. Histologically, the key feature of this lesion is exceedingly cellular mass of connective tissue comprising large number of plump, proliferating fibroblasts intermingled throughout with delicate fibrillar stroma.

According to Buchner and Hansen, 1987 mineralized contents that are found in POF are basically three types:

Complete surgical excision along with deep periodontal curettage is the treatment of choice suggested by authors and that was performed in our case also. As there was gingival recession and extrusion of tooth to achieve complete treatment for the patient root coverage surgery along with necessary orthodontic correction was planned as future treatment.

Even after surgical removal POF can be occurred again due to persistence of the local irritants, repeated injury, unable to remove completely in during surgery in 8%–20% cases.17

Here we present a case report of peripheral ossifying fibroma (POF) clinically which shows similar sign and symptoms like other gingival overgrowth like peripheral fibroma, peripheral giant cell granuloma, and pyogenic granuloma. The only way to confirm the diagnosis of the lesion, histopathological evaluation was done to detect as a POF after surgical excision. POF is a nontender slowly progressive reactive lesion and complete surgical excision along with deep curettage is the treatment of choice to minimize the chances of recurrence. Post surgical follow up for a long term basis is also required for early detection if there are any signs of recurrence.